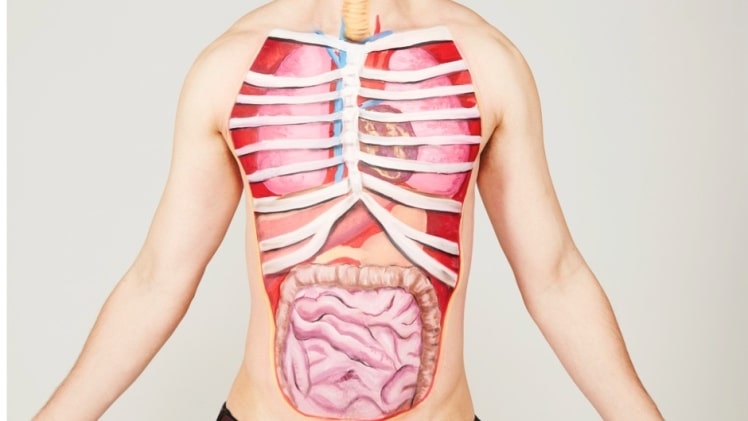 The human body is a composition of billions of cells, tissues, organs and systems. There are different bodily functions that keep happening in the body to maintain a state of homeostasis.

To maintain this constant state, there are 11 systems found in the human body, without which life becomes impossible. The major human body parts include the head and neck, with four limbs that are connected to the torso. Let us discuss the eleven bodily systems one by one.

The human skeletal system is composed of a skeleton that forms the entire framework of the body. The skeleton is made up of bones, cartilages, connective tissues, ligaments and tendons. Since humans are vertebrates, the skeleton is broadly divided into two, the axial skeleton and the appendicular skeleton. The axial skeleton includes the vertebral column, spine and skull. The appendicular skeleton, on the other hand, includes the pelvic and pectoral girdles and the bones and cartilage of limbs.

The human muscle system consists of three types of muscles—striated, smooth and cardiac muscles. The muscles basically control the movement, posture and balance of the body. The smooth muscles are involuntary in nature and are found in the urinary bladder, blood vessels and the walls of the intestine and stomach. The cardiac muscles, on the other hand, are found in the heart and control the involuntary rhythmic contractions. Lastly, the striated muscles are found in places such as the biceps and triceps, which can be voluntarily controlled.

The nervous system is a specialised group of cells called nerve cells that are responsible for transmitting electrical impulses from the site of production to the site where it is actually received.

The endocrine system is composed of glands that are responsible for the production of hormones. Hormones are chemical messengers that travel throughout your body to carry out all sorts of bodily functions. Some of the glands of the endocrine system include the pituitary gland, the pancreas, the adrenal glands, the thyroid gland, testes and ovaries.

The lymphatic system consists of a network of vessels, tissues and organs and is a subsystem of the circulatory system. This system is responsible for collecting excess fluid off of the body and depositing it back into the bloodstream. This helps to maintain the fluid balance in our bodies. In simple terms, this system can be thought of as a drainage system.

The human digestive system is composed of the mouth, teeth, tongue, pharynx, oesophagus, stomach, small intestine, large intestine, and rectum. All these organs together form the digestive tract through which the food passes, gets absorbed and passes into the bloodstream. These organs together function for the physical and chemical breakdown of the food particles and, finally, the elimination of indigestible wastes.

The human respiratory system is designed in such a way that it consumes oxygen inside the body and expels carbon dioxide outside the body. It is composed of a gas exchanging organ called the lung.

The cardiovascular system consists of a heart with its blood vessels that is responsible for the transport of blood (containing oxygen and nutrients) throughout the body and also removing carbon dioxide and excess waste products from the body. The human heart is a four-chambered organ that is present on the left side of the body.

The urinary or the renal system is the site where urine is produced in the human body. It includes the kidneys, urethra, ureter and bladder. The kidney is present as a paired organ in the human body that functions to control the electrolyte composition of blood and also remove unwanted wastes from the blood. The kidneys perform both secretion and active absorption of certain substances to maintain balance.

This is an overview of the human body and the 11 systems it possesses. Stay tuned with BYJU’S to learn more interesting topics.

Tips to remember when preparing for GRE